Eden Hazard: If I could tempt Kylian Mbappe to Real Madrid…

Eden Hazard has stated he will try to persuade Paris Saint-Germain striker Kylian Mbappe to join him at Real Madrid.

The two go head to head in a Champions League group stage match in the Spanish capital on Tuesday evening.

“He has a great talent. I think that in a few years, he will surely be the best player in the world,” Hazard told Le Parisien, as cited by Marca.

“And if he continues like this, Kylian will be one of the best players in history. A footballer always dreams of playing with the best and if tomorrow I can help bring Kylian to Real Madrid, I will try.

“But it's not me who decides and, besides, I don't think anyone asks me for my opinion.”

Zidane responded when asked directly about the striker in his pre-match press conference: “Do you know that I have known about him for a long time?

“It is not the first time that I have seen him and of course, I am in love with him.

“I love him as a person because he came here on a trial a long time ago, but is he in love with Real Madrid? He is a rival player, so we cannot speak about that!”

Zidane told a separate press conference earlier this month, as cited by Marca: “For the moment he (Mbappe) is with PSG. We will see in the future. He always said that his dream was to play at Real Madrid one day.”

Those comments prompted Paris Saint-Germain sporting director Leonardo to confess he was ‘annoyed’ by Zidane’s attitude on Mbappe.

At the start of November, Marca cited a report from Le Parisien which claimed Paris Saint-Germain will offer Mbappe a new contract on ‘Neymar levels’ with an annual net salary of €40m.

AS Monaco president Vadim Vasilyev has also revealed: “Mbappe has told me of his desire to go to Real Madrid.” 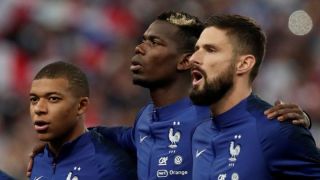 Argument in the French camp between Olivier Giroud and Kylian Mbappe
10 June 2021, 10:46