The father of RB Salzburg striker Erling Haaland has visited Manchester United facilities, fuelling reports of a transfer next year.

The revelation was made by esteemed journalist David Ornstein in The Athletic on Monday, claiming Erling's dad Alf-Inge Haaland – who played for several clubs in England – visited United’s Carrington training base.

It follows a report in Diario AS which claims that whilst Real Madrid have an interest in the player, it is understood that United are favourites for his signature.

The report claims that whilst Los Blancos have made an approach for the Norwegian, they have been put off by his €100m price tag.

It is a report similar to a recent one from ESPN FC which said that Barcelona had also registered an interest but the asking price discontinued any advancement.

The 19-year-old was coached by fellow Norwegian Ole Gunnar Solskjaer at Molde and a recent report in Diario AS claimed that if the manager is still in place at Old Trafford come next summer, the striker will be a primary target for United, while the same report also spoke of Madrid's interest. 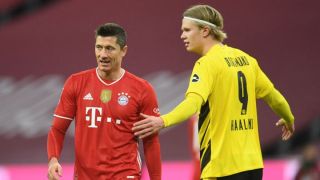 Heavyweight rival emerges to compete with Real Madrid in their bid to sign Erling Haaland
26 June 2021, 14:52