Barcelona may have to pay up to €200m if they are to lure Lautaro Martinez from Inter, according to El Mundo Deportivo.

It is a fresh claim that this is the striker’s release clause, which had originally been reported to stand at €110m – an attainable value for the Spanish champions.

A report in Calciomercato this week claims that the Milan-based striker has been identified by Barcelona as being the long-term replacement for the ageing Luis Suarez.

Last week in Tuttosport, as cited by our sister site Football Italia, the Milanese giants believe the Blaugrana would be well placed to trigger the reported €110m clause in the Argentine’s contract – although such an amount may now be significantly higher.

Earlier this month, El Mundo Deportivo cited Corriere dello Sport in reporting that Lionel Messi had advised the Catalan club to make the move for his international teammate.

The striker has netted 10 Serie A goals across 35 appearances for the Nerazzurri and twice across eight appearances in Europe.

He has started eight matches for Antonio Conte’s side this season while his fellow countryman Mauro Icardi has departed to Paris Saint-Germain, with Romelu Lukaku and Alexis Sanchez both joining.

“Talk of Barcelona’s interest is true,” the player’s agent Alberto Yaque told Ole back in July.

“No-one’s called us, but we know that they’ve been looking at him strongly. It’s true that Barcelona like him.”

It has been previously claimed that Martinez’s market value is now in excess of €100m and he scored within two minutes at Camp Nou in their recent Champions League encounter.

Inter are said to be concerned by Barca’s interest and starting negotiations for a new contract that would significantly raise or even remove the clause.

His current deal runs to June 2023 and was signed in July 2018, when Inter paid Racing Club €24m for his services. 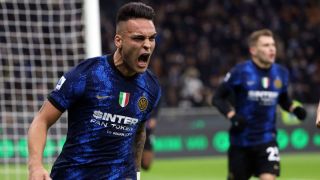