Isco has already accepted he will be leaving Real Madrid and is preparing for a move to the Premier League in January, say Diario AS.

Arsenal and Manchester City are said to be the two teams in the running – with the latter seeing him as a replacement for David Silva at the club.

Zinedine Zidane is thought to be a keen admirer of Isco but equally would not block a transfer should a big-money offer come in from elsewhere.

Juventus, Milan and Manchester City have been among the clubs linked to the playmaker but no interest has ever been formalised with an offer.

The 26-year-old had been frozen out of the starting XI by previous Madrid boss Santiago Solari – not starting a match across La Liga or the Champions League under the Frenchman’s predecessor.

Isco has a contract at the Santiago Bernabeu until 2021 but found the net just three times in a mere 11 La Liga starts last season, with his future appearing to be in the balance.

It appears unlikely that the former Malaga playmaker will be a regular in Madrid’s line-up this season while any sale would be a reluctant one – he did make a rare start against Real Mallorca at the weekend but underperformed, like the rest of his teammates. 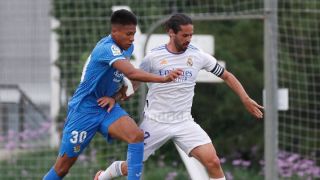