Goalkeeper Keylor Navas is on the verge of leaving Real Madrid as he is in negotiations with Paris Saint-Germain, say reports.

Marca cite a report in La Nación de Costa Rica which claims talks are advanced between the shot-stopper and the French champions.

The Costa Rican had been behind Thibaut Courtois in the pecking order for the majority of last season while Luca Zidane, son of Zinedine, had also been selected ahead of the Costa Rican. 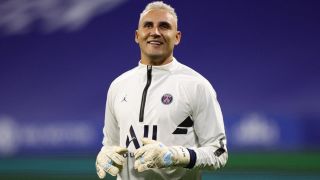