Real Madrid forward Rodrygo is set to miss the club's first game of the 2019-20 La Liga season through injury.

The Brazilian U20 international suffered a thigh injury during pre-season training and is know rated as doubtful for Los Blancos' trip to Celta Vigo on August 17.

Manager Zinedine Zidane confirmed the news during his midweek press conference, adding that he was considering calling the 18-year old up from the club's Castilla side, to the first team.

The first team have completed their pre-season match schedule, however the reserve side were due to play a behind closed doors friendly against Cultural Leonesa this weekend – a match Rodrygo will miss.

The signing of the former Santos man has gone somewhat under the radar this summer, given Real Madrid's big spending on other players, however he has caught the eye during their pre-season tour of the United States.

Real Madrid’s Brazilian starlet is in love with the club and the Champions League
28 November 2020, 11:01 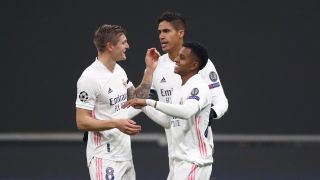