Lyon full-back Ferland Mendy is undergoing a medical with Real Madrid ahead of a €50m transfer, according to Marca.

Earlier on Monday, El Mundo Deportivo claimed the deal was close and the fresh report now states that all terms have been agreed and confirmation could be ‘just hours away’.

The 23-year-old has made 79 appearances for the French club since his 2017 move from Le Havre and has been called-up to the France national team, while he has also been linked to Barcelona and Paris Saint-Germain.

Mendy, who has dual nationality with Senegal, has received comparisons with current Madrid full-back Marcelo, whom Zinedine Zidane reportedly wants to provide competition too.

Sergio Reguilon may be loaned out by Los Blancos this summer while it does not appear that Theo Hernandez – on loan at Real Sociedad – has a long-term future in Madrid.

It is thought that the strong relationship between Madrid and Lyon will eventually see the transfer go through at some point in the next month.

“Honestly, I do not have a dream club…today, I'm at Olympique Lyonnais, I'm fine here,” Mendy told Telefoot back in November.

“I'm thinking about completing the season here with the club, with my team-mates and giving everything until the end of the year. 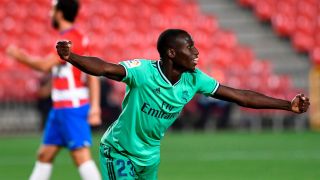