Malaga are considering a move for Getafe striker Jorge Molina this summer as they attempt to revamp their first-team squad, say reports in Spain.

The 36-year-old has a comprehensive scoring record in Spain’s second tier after netting 22 times for Getafe in the division two seasons ago and hitting 19 for Real Betis in 2014/15.

Marca say the veteran striker is a leading candidate for the Costa Del Sol club to reinforce their attack this summer. 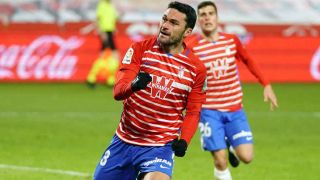