France boss Didier Deschamps believes former Real Madrid Coach Zinedine Zidane will replace him in his role in the future.

Speaking after Zidane surprisingly quit Madrid after landing their third successive Champions League title, the French tactician believed his move into international football would be a ‘logical’ step.

“Zizou will have taken the decision which is the best thing for him to do,” Deschamps told reporters, as cited by Marca.

“After being in that (Real Madrid) job for the time he has and the success he enjoyed, he is undoubtedly keen to rest and spend time with his family.

“I cannot predict his future of course but I imagine that one day he will be the France national team Coach, that seems logical.” 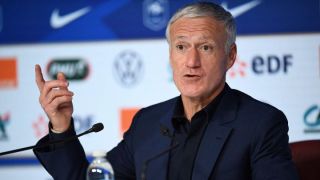 Didier Deschamps tips Zinedine Zidane to become coach of the French national team: “It’s probable that one day he could succeed me on the bench”
21 March 2021, 17:20