Turkish giants Galatasaray have lodged a €5m offer for Sevilla’s Brazilian full back Mariano, according to reports in Spain.

El Desmarque report the Andalucians have a preference for retaining the 31-year-old, however his contract expires next season and they believe his sale would represent solid business.

The right-back also takes up a ‘non-EU’ slot in Eduardo Berizzo’s squad and reports suggests his request for Spanish nationality will not be processed in time for next season.

He is reportedly open to the move due to a significantly increased salary should he move to Turkey and would be guaranteed first-team football with the chance of winning major trophies.

The report continues that the deal is far from concluded and Los Rojiblancos will be keen to line up a replacement before any deal is done.

Mariano signed for Sevilla two years ago for €3.5m from French club Bordeaux, and replaced Coke in the starting line-up. 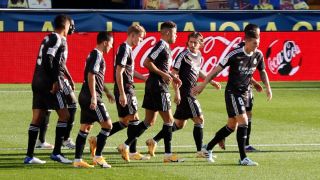