Luis Enrique reveals he is open to the idea of returning to Barcelona in the future ahead of his final game, the Copa del Rey Final against Alaves.

Speaking at his final pre-match Press conference for Saturday’s showdown, Enrique reflected on his past three years in charge of Barca, as well as the threat Alaves posed at the Vicente Calderon.

“Right-back? I understand that a team like Barca must be sufficiently prepared to cover any losses,” began the Coach.

“I have several options, I can use two or three players in this position, but I won’t give any clues.

“Messi? Trophies are won by the team and also the best player in the world.

“It was a great pleasure to have [coached] the best, he’s an example of what a player should be, an example for all his teammates.

“Neymar? Neymar has evolved since joining Barca. He’s more aware of what he can offer and he’s grown.

“The Press? It’s a circus, but I won’t say who the clown is!

“I’ve tried to protect my players, that’s my style. I haven’t tried to disrespect anyone and that’s what it is.

“Deyverson? He’s one of the most complicated forwards to face in the League. He’s a fighter and he’s good in the air.

“There are many things that players can improve on, and I’ve tried to help them.

“Could I return to Barca? I’m young, kind, why not? Maybe in a while, the opportunity will come along again…

“Alaves? It’s true that for Alaves, it’s a unique event, but this game has two readings.

“There will be a lot of tension, but we’re more used to playing in finals than them.

“It’s possible that they beat us in terms of enthusiasm but not ambition. I haven’t met such an ambitious group.

“Still, we’re enthused by the mere fact of a trophy of this significance. It’s one of the best games that can be played by this club.

“It’s a special match, and there’s the possibility of finishing my cycle in Barca with another trophy, so we’re focused on our opponents, who have been the League’s revelation.

“My legacy? I’m interested in Barca having a good game. If we do, we’ll have a bigger chance of winning.

“If we analyse our trajectory in the Copa, it’s been hard and difficult to reach the final. We have to seize the moment.

“Being a leader the most important thing as a Barca Coach? No, there are many more things.

“There are always a number of factors and conditions that you have to control. Managing any team is difficult, so imagine what Barca are like.

“What I’ll remember from my time here? Everything. They’ve been experiences on a personal and professional level. I’ve always demanded the maximum.

“Alaves? I’m concerned about the fact that they’re team in form. They’ve had a very good season.

“It’s something that we must consider, but I hope we can show our superiority with our football.

“Non-football issues? For as long as I’ve been here, there’s always been noise from the outside, but we’re professionals and focused on ourselves.

“Mascherano? [His return] comes in handy, I could use Andre [Gomes], Lucas [Digne] or Aleix [Vidal] if the medics think they’re in good-enough shape.

“Previous meetings in the League? They give us an indication of how our opponent play.

“It’s simple things that have got them to where they are, but they do those things very well.

“What I’ve done wrong here? There’ll always be someone who thinks I haven’t done well. I don’t hold grudges, and I learn a lot from my mistakes.

“What will I do after Barca? I don’t know. I’m a guy who plans well in advance, but I’m not clear on what I’ll do.” 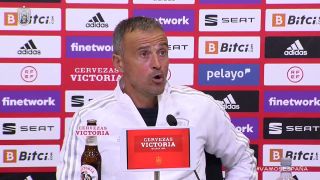