Pedro Rodriguez has expressed his desire to remain part of the Spain set-up under Vicente del Bosque’s successor.

Pedro was roundly criticised for complaining about his lack of game time during Spain’s unsuccessful Euro 2016 bid, but he is keen to prove himself to the new Coach after insisting his “very good relationship” with Del Bosque and his international teammates.

“I had a very good relationship [with Vicente del Bosque], despite everything that’s been said,” the Chelsea forward said at a children’s foundation bearing his name in his hometown of Tenerife, Marca reports.

“We had good times together, besides becoming world and European champions. It’s good for everyone [that he is staying on in a different role].

“[On why he wants to remain part of the Spain set-up], it is most important [to me] and gives a player a lot of prestige.

“[On Del Bosque’s rift with Iker Casillas], sometimes [what’s reported] is more than what’s said because we’ve always had a good relationship with one another in the dressing room. It’s a shame that Del Bosque is leaving.

“I’m very motivated [about returning to] Chelsea to and taking the team back to where they should be.

“[My first season] was one of adaptation and difficulty, but I want to have a great [second] season.

“[On the Premier League], it’ll be very competitive with Coaches like Pep Guardiola.

“[On his hometown club Tenerife], it’s a long-term possibility that could happen.

“[On Lionel Messi], we’re talking about the best player in the world. I wish a lot of support for him and his family.” 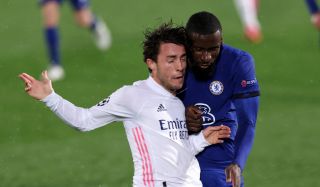