‘Ter Stegen right to be unhappy’

Barcelona VP Jordi Mestre claims Marc-Andre ter Stegen is right to question his future as “I’d be concerned if a player who doesn’t play says he is happy”.

The goalkeeper recently threatened to quit the Catalans if he did not receive more first-team football, having grown frustrated with only playing cup matches, but the club official was unconcerned by the player’s remarks, although he warned that “to play for Barca, you must be competitive”.

“[On Messi’s renewal] when the time comes, it will come,” he told Mundo Deportivo.

“There’s no hurry. We must be careful, of course, but if he says he’s happy then there’s zero concern.

“[On Busquets], when the time comes, we’ll talk to Busi, his representative, his wife if necessary.

“Everyone at the club appreciates what Busi means. It was an injustice that he wasn’t in the FIFPro World XI.

“There’s always contact [with players over renewals], it’s the work of executives, but we don’t want anyone to suffer. A player who doesn’t want to leave won’t.

“[On keeping their best players], our obligation as a board and our challenge is to earn more revenue, not just to sign more players.

“[On Suarez and Rakitic’s renewals], I’m not saying yes or no. I’ll say so at the time, when it happens.

“[On Ter Stegen’s unhappiness], I’d be concerned if a player who doesn’t play says he is happy.

“To play for Barca, you have to be competitive. From there, it’s a dressing-room issue. The board doesn’t influence these decisions.

“It’s clear that we have three great goalkeepers, Ter Stegen, Bravo and Masip, the latter of whom I’ve seen for the ‘B’ team and is a great goalkeeper, and we’re delighted to have all three.

“[Ter Stegen not playing] is more a technical decision than a directive one. We won’t make a decision on any player.

“From a sporting perspective, that’s for Luis Enrique and Robert to say, but leaving this club is very difficult.

“When great players play, I do not see why they should go. It's like when we sign players: we try to get who the Coaches want.

“We don’t have a say over who comes in and who doesn’t. We tell [the Coaches] how far we can go, and from there we negotiate.” 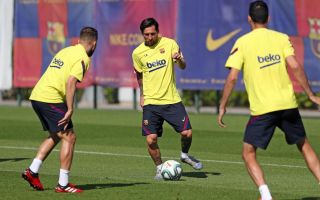 Barcelona trio expected to be rested for Champions League clash with Ferencvaros
1 December 2020, 12:18