Jamie Carragher believes former Liverpool teammate Luis Suarez is the world’s best striker and has made Barcelona even better than under Pep Guardiola.

Ex-Reds centre-back Carragher has spoken to AS regarding Arsenal’s Champions League second leg with Barcelona, and in more detail about Suarez.

“He’s sensational, the best striker in the world. If we were to talk about the best players in the world I’d say Lionel Messi, Cristiano Ronaldo and Suarez,” Carragher revealed.

“Luis has contributed directly to a Barca that is even better than the one Guardiola had. I thought that was impossible, but he’s directly helped Messi return to the best in the world.

“The challenge now is to be No 1 and I think he has enough talent to get there.”

Carragher was asked why players such as Messi, Suarez and Neymar don’t play in the Premier League, even as the division swims in TV money.

“The problem is always the same. All the great players want to play for Barcelona or Real Madrid,” he replied.

“They’re the best forwards in history. The statistics speak for themselves, but I’d go a little further. Seeing the three play is the greatest joy.

“There are several games. The one that comes to mind is the win over Celta Vigo a few weeks ago at Camp Nou.”

Suarez recently visited the Liverpool training ground and it was put to Carragher that while English people go to Spain for the sun, there’s perhaps a less obvious reason why Spaniards and non-Brits enjoy Liverpool so much.

“It’s our sense of humour! They return because they feel loved in Liverpool, more than anywhere else,” he explained, before moving on to a former manager still with strong ties to Anfield, Rafa Benitez.

“His style was very successful over the seasons he sat on the bench but the fact is sometimes he can upset the team’s superstars, who aren’t used to his methods.

“At least that’s what I thought when he tried his luck with Inter, in Italy, or Real Madrid in Spain.” 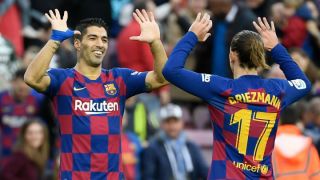