Espanyol loanee Marco Asensio has insisted that it is too early to tell whether he will return to Real Madrid at the end of the season.

The 19-year-old has impressed in his opening matches for Los Periquitos since joining on a season-long loan, but he is refusing to acknowledge the praise as a sure sign that he will resume his career at the Santiago Bernabeu.

“It was very exciting to receive the fans’ support. It helps me and the team,” he said at a Press conference.

“When we’re united, wins like the one against Valencia are achieved. As for the praise, I’m taking it easy.

“It’s too early to assess whether I will return to Madrid. We’ll see what happens at the end of the season.

“I feel more comfortable in the position of attacking midfielder. I can also play on the wing, but that’s up to the Coach.

“I try to isolate myself from everything that people say [about my perfomances]. I only try to train well and play well.

“I don’t feel nervous. I didn’t expect such a good start, but I always expected to do well for Espanyol.

“I feel no pressure as I have nothing to prove.” 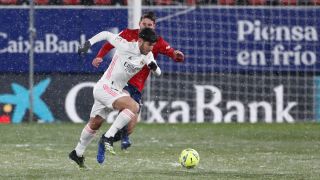