Reports in the Spanish Press on Monday claimed that a meeting between Ramos and Madrid President Florentino Perez ended amicably, with contract negotiations now expected to resume, and the Coach believes this to be the case.

“Both halves were good. We changed many players, those who stayed on are a little tired but there was a good pace to our play,” he said after the match in Guangzhou, which was wrapped up by goals from Jese Rodriguez, Raphael Varane and James Rodriguez.

“We played well, scored goals and didn’t concede. We must continue working on our defensive game and maintain our edge [in front of goal], but little by little [improvements] being seen on the pitch.

“[On giving his attackers free roles], they’re allowed to do whatever they think they should do.

“From there, the team should come together and work hard defensively. Overall, there are many positive things again.

“[Our defence] isn’t what worries me. It’s clear the team can improve further because our attack is very good and from there we must work down.

“I saw us allow [Inter] very few chances and score on three occasions, which is a result of our hard work paying off.

“[On free kicks], Cristiano [Ronaldo] took them in the first half and James [Rodriguez] in the second, but we’ll see.

“[On Jese’s return to form], he previously had an injury. When you have continuity, as we are seeing with him, it improves your fitness, and his quality has improved.

“[Jese’s] showing desire [to improve his game] and that’s what matters.

“The versatility of our players makes us stronger. You need a good attitude, and he has it.

“I spoke with the President at dinner on Sunday and he told me that he was going to talk to Ramos.

“I asked them both [about the meeting] and both were optimistic, so we’ll see what happens.

“I think competition is always good for goalkeepers. They haven’t had much work yet, but both [Keylor Navas and Kiko Casilla] have done well. It’s good to know that there’s always an alternative.

“The key [to success] is attitude. My team have a very good attitude, which allows us to defend well and attack well, and they’re doing that.

“There’s no need to risk anyone [against Milan]. They’ve played well in these three games and we’ll now see who can play against Milan.” 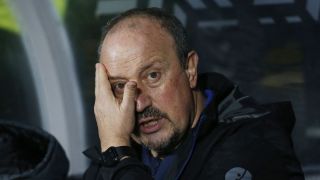