Barcelona have reportedly given Sergi Samper, Sandro Ramirez and Munir El Haddadi assurances that they will all be promoted to the first team next season.

The trio enjoyed senior action earlier in the season, with Munir even earning a Spain cap for his performances in the autumn, but they have ended the campaign fighting for Segunda survival with the B team.

It is feared that Barca may lose a number of their starlets if they are relegated to Segunda B, but Mundo Deportivo claims Samper, Sandro and Munir will all have a role to play under Luis Enrique next term.

Sandro was linked with Newcastle as recently as Thursday, but any move for striker, along with his fellow attacker Munir and midfielder Samper now looks dead in the water. 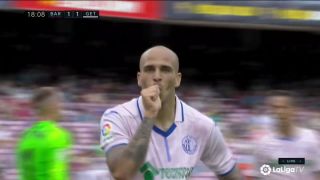