Barcelona Vice-President Josep Maria Bartomeu has travelled to London in an attempt to wrap up Alex Song’s transfer.

Mundo Deportivo reports that negotiations between Arsenal and the Catalan giants for the defensive midfielder have intensified over the past 24 hours and agreement is very close to being reached.

Barca are believed to have tabled a €15m offer for the Cameroon international, although they are aware the fee could eventually rise to around €18m if the Gunners decide to dig in their heels.

The London club know that Barca still officially have €26m to spend on new signings before the close of the summer transfer market and have asked for at least €24m, a figure La Blaugrana President Sandro Rosell is unwilling to pay.

However, the Barca hierarchy are keen to keep new boss Tito Vilanova happy with just days to go before the start of the La Liga season and are prepared to be flexible, so long as Arsenal do not raise the stakes for the 24-year-old former Bastia player at the last minute. 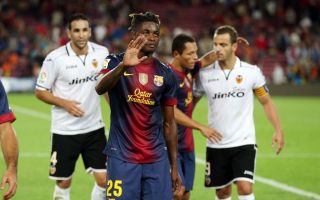